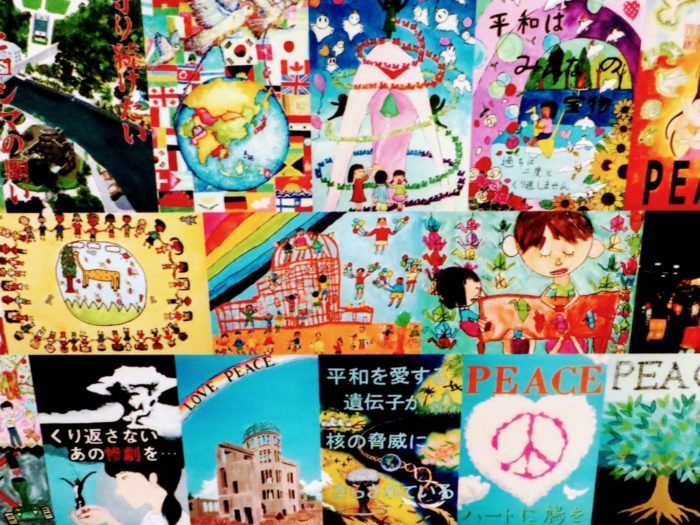 Life forever changed for Hiroshima and its residents on 6 August 1945 when the world’s first atomic bomb was dropped on the city.

Now, over 70 years later, visiting Hiroshima’s Peace Memorial Park, which comprises a number of memorials, monuments and museums dedicated to the legacy of the attack, is one of the most important and popular things to do in Hiroshima, if not the whole of Japan.

Although I knew that a visit with ‘highlights’ that include the Atomic Bomb Dome, the Children’s Peace Memorial and Peace Memorial Museum was going to be tough going,  I spent a day there nonetheless.

There is plenty of literature cataloguing this internationally significant event so I won’t do it the injustice of a short summary here. Instead, the following is a guide to things to do in Hiroshima’s Peace Memorial Park and a selection of photographs from my visit.

If you get the opportunity to visit the city, I would highly recommend adding Hiroshima’s Peace Memorial Park to your Hiroshima itinerary. While it won’t be the most upbeat day you will have, it’s a healthy reminder of the ongoing need to support the effort for world peace.

Things to do in Hiroshima Peace Memorial Park

Hiroshima’s Peace Memorial Park is a prominent feature of the city that stretches over 120,000 square metres. Sat where the financial and political centre once stood prior to the bombing, the space today is a haven of tranquillity where people go to remember the fateful events of 1945 or simply just be.

The purpose of the Memorial Park is not only to memorialise the victims of the Hiroshima attack but also to shine a light on the history of nuclear attacks and advocate world peace.

The sights below are all located within the park and well signposted so that you’ll easily be able to find your way around. 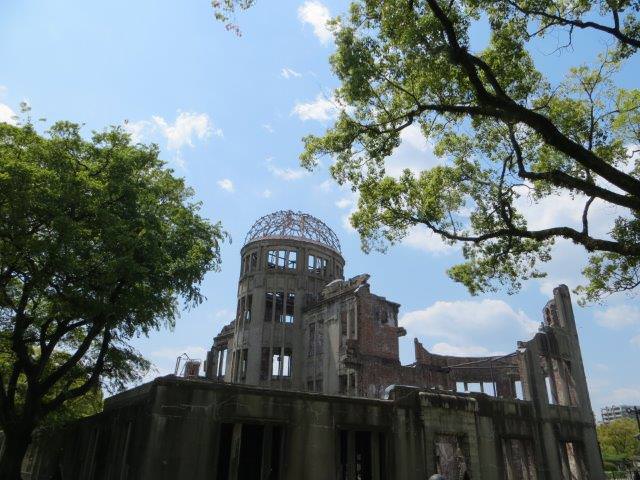 The Atomic Bomb Dome, which is more formally titled the Hiroshima Peace Memorial but is also commonly known as the A-Bomb Dome or Genbaku Dome, is probably the most important building in the park. Once a Prefectural Industrial Promotion Hall (a place where local business promotion was carried out), the structure is one of the few buildings that remained standing after the bombing.

Today the A-Bomb Dome is a UNESCO World Heritage Site and has been left almost exactly how it was after the attack as a reminder of the suffering caused by the bomb. 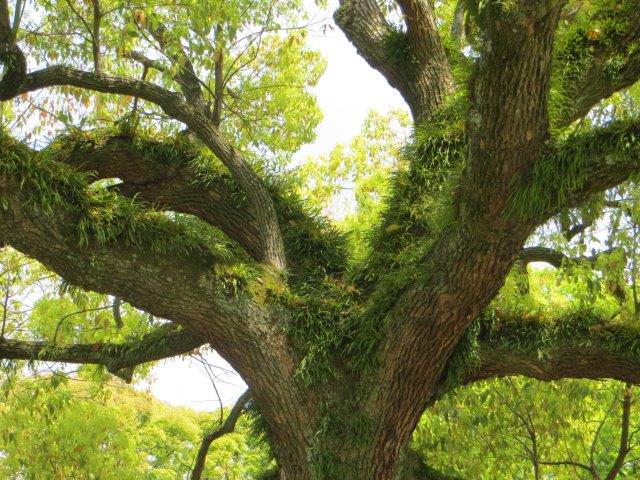 After the atomic bomb was dropped, it was thought that nothing would grow in Hiroshima for up to 75 years. If that were true, Hiroshima would be a barren land even now. Fortunately, greenery is thriving and nowhere more evident than in the park, as illustrated by this super-hairy tree. 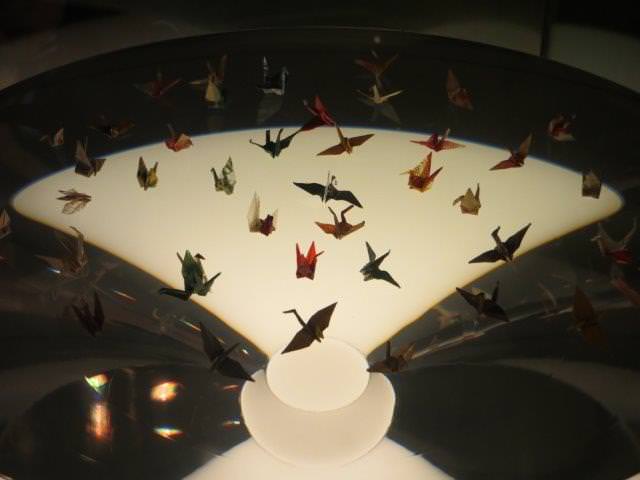 If you haven’t heard the story of Sadako Sasaki, be warned it is a sad one. A local girl, Sadako was two years old when the bomb dropped and although her family were initially relieved she survived the bomb, ten years later, aged 12, she developed leukaemia.

Believing the old adage that by building a thousand paper cranes, she would be granted a wish, Sadako tried to recover from her illness by tirelessly folding paper cranes. Sadly, her efforts were in vain and Sadako died, leaving her classmates to complete her crane folding.

The image above is of some of Sadako’s cranes, which can be seen in the Peace Memorial Museum. 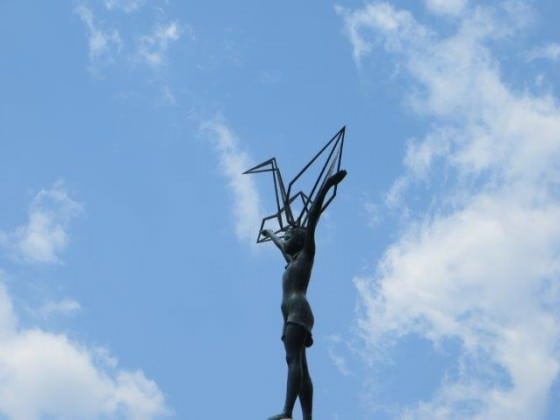 At the top of the nine meter monument, a bronze statue of a young girl lifts a golden crane entrusted with dreams for a peaceful future. The inscription on the monument reads: “This is our cry. this is our prayer. For building peace in the world.”

Sadako’s story prompted the building of the Children’s Peace Memorial within the park to commemorate Sadako and all the other children who died as a result of the bomb. 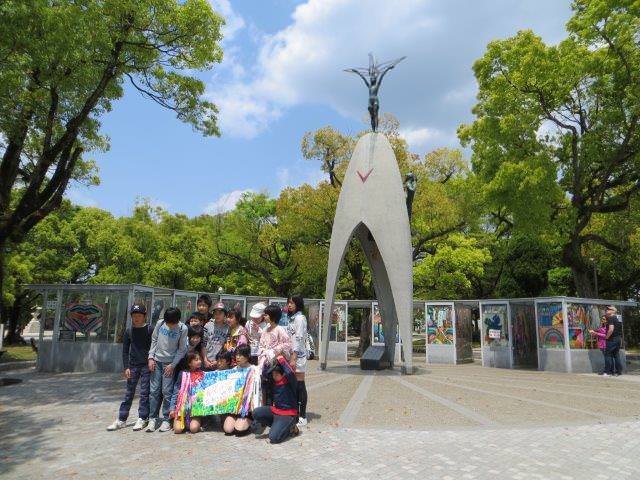 Today, the crane has been taken as a symbol of peace. Many school children were at the memorial during my visit, such as the class above who were donating their own crane mural as many children before them have also done. 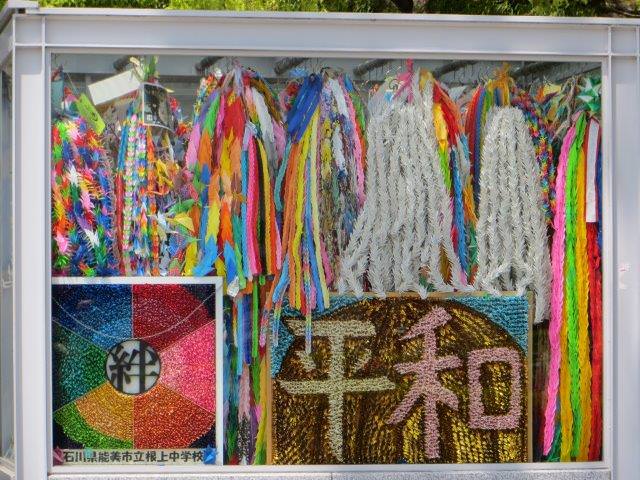 A group of children were singing at the memorial and while I couldn’t understand the words, I’ve no doubt their soft song was a sad one. Afterwards, I felt humbled to watch as the small girls and boys cried for the generation of children who were strangers to them but who had suffered at the hands of the bomb. One of the hardest things to see in Hiroshima is the emotional scar it has left on the local population even today. 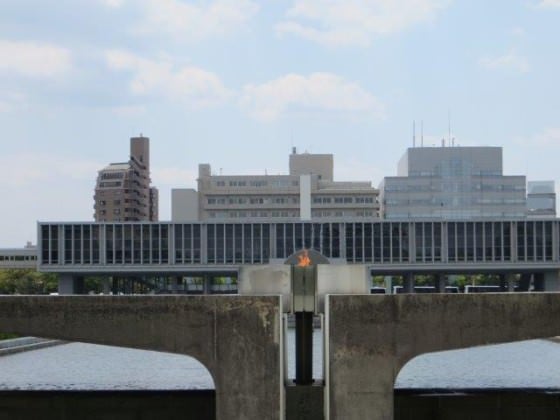 The Peace Flame is another memorial to the bomb and has been continually aflame since it was first lit. It is said that the flame will remain lit until the world is free of all nuclear bombs. Sadly, the following is a map of the current existence of nuclear weapons around the world, demonstrating that it will be some time yet before the flame can be extinguished. 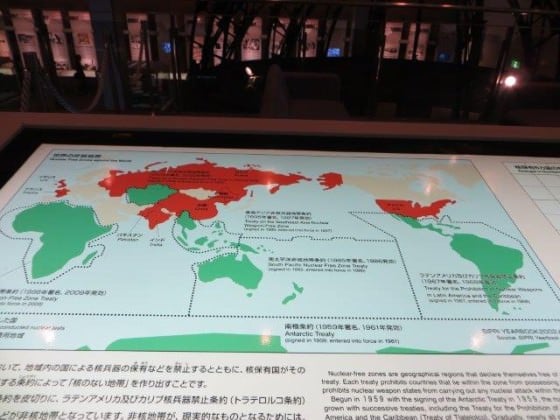 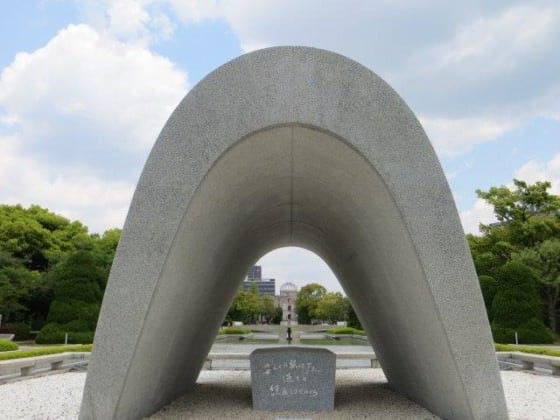 Near the centre of the Hiroshima Peace Memorial Park stands a large concrete structure known as the Memorial Cenotaph which holds the names of all of those killed by the bomb. The arch shape was designed to be a shelter for the souls of the victims.

The inscription reads: “Let all the souls here rest in peace, for we shall not repeat the evil.” It expresses the spirit of Hiroshima: enduring grief, transcending hatred, pursuing harmony and prosperity for all, and yearning for genuine, lasting world peace. 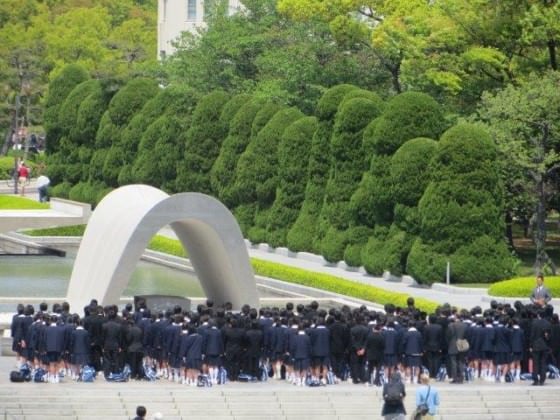 The museum features a number of floors that record the history leading up to the war, the dropping of the bomb, the aftermath and many artefacts. As sombre as it is, I was impressed by the objectivity and completeness of the history, which included Japan’s attacks on China and Pearl Harbor. You can read about my visit to Pearl Harbor here.

The museum included survivor recollections of the event. 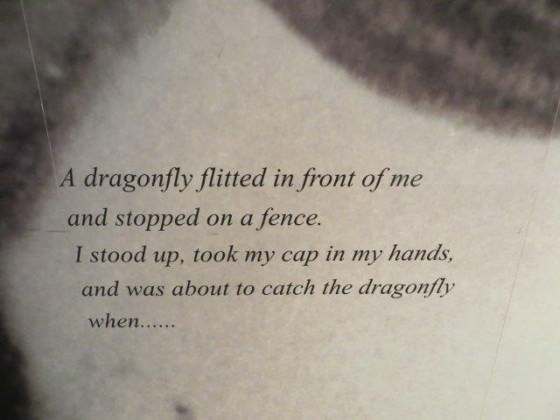 This watch stopped at the exact time the bomb hit. 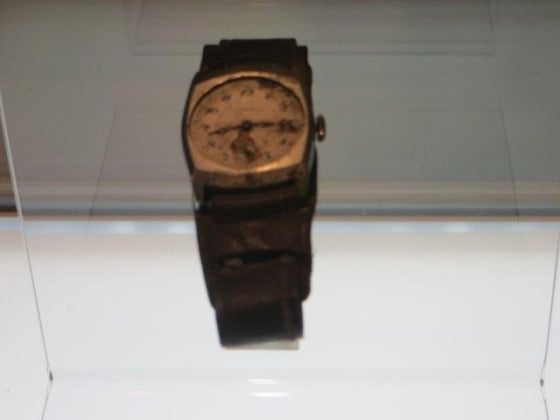 There were also aerial images depicting the city before and after the bomb, demonstrating the level of destruction. 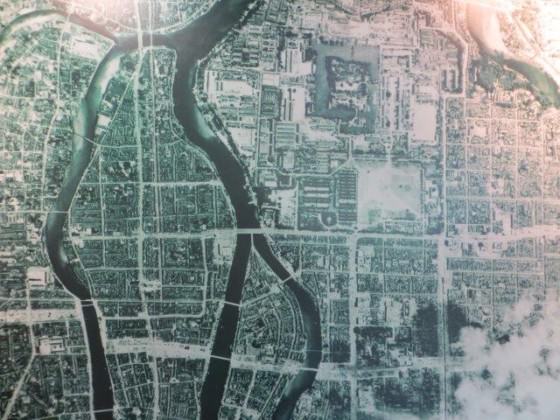 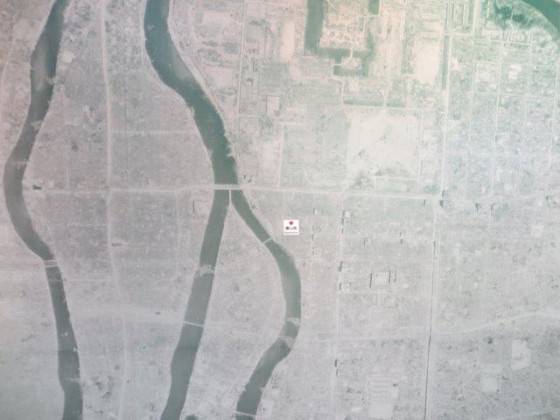 The week before I flew to Japan, the country mobilised its defence missiles through fear of attack from North Korea, a country known to have nuclear weapons, but with no real clarity on the extent of their nuclear ability. The threat is ongoing and a reminder that peace cannot be taken for granted. 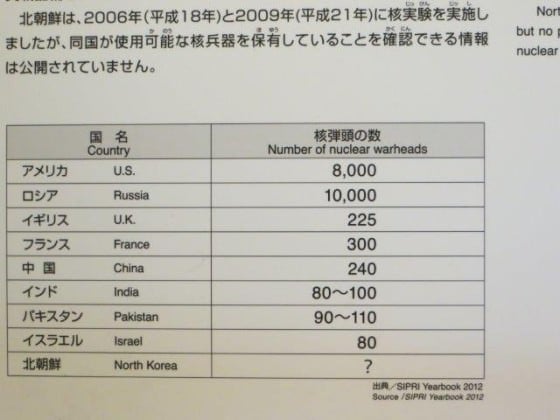 While I’m sure my signature won’t create peace all on its own, I took the time to stop at the petition box and sign a form. As I left the Peace Memorial Park, I couldn’t help but wish that a visit to Hiroshima were mandatory for every person at least once in their lifetime. 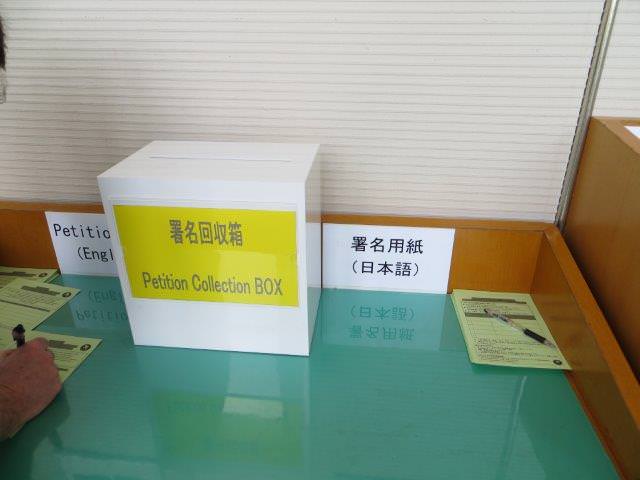 If the world needs a painful reminder of the destruction and devastation caused by war and, worse, nuclear war, it rests in the city of Hiroshima and in it the hope that we can, if not immediately, then perhaps with a new generation, get closer to the promise of enduring world peace. 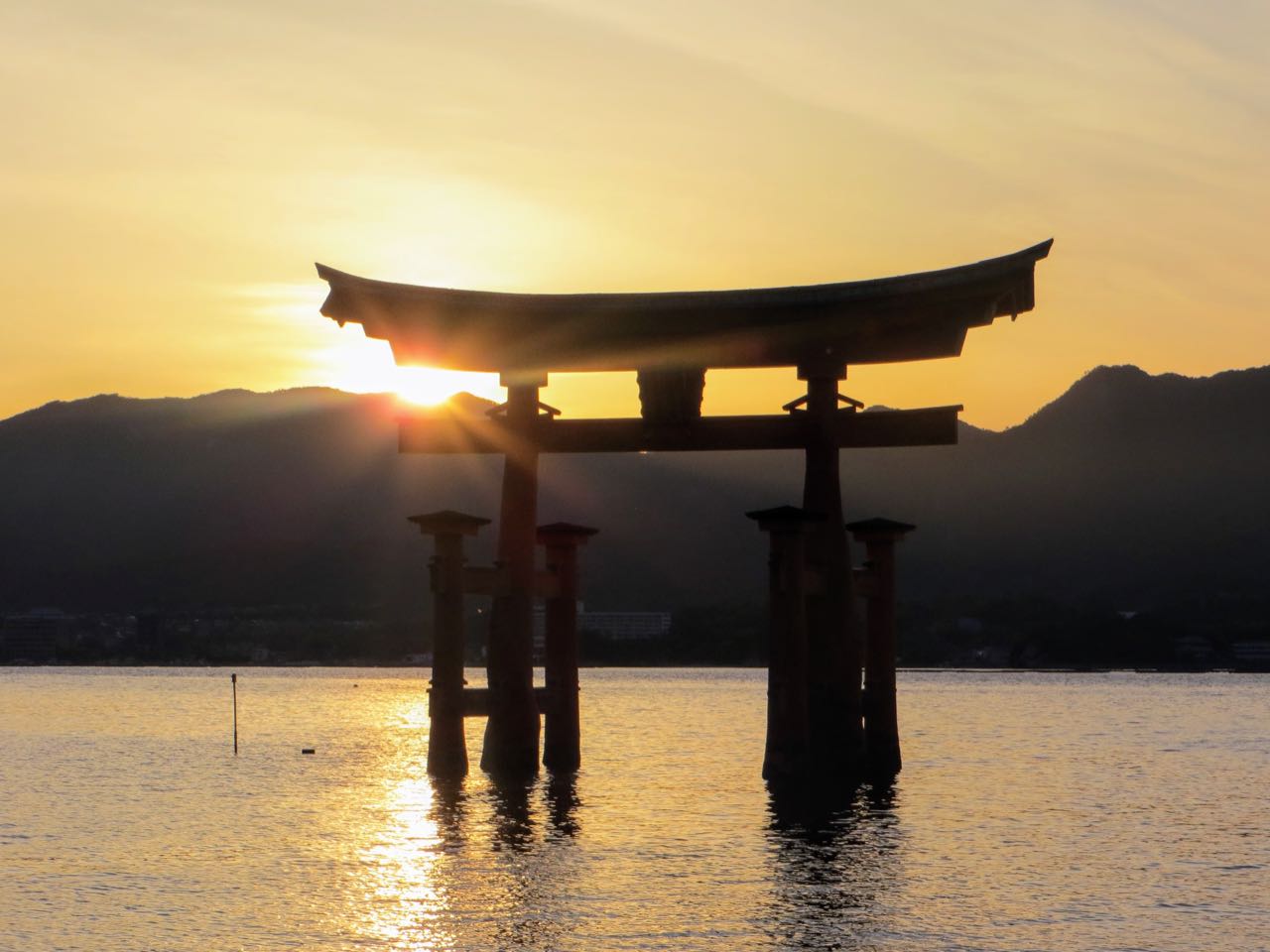 If you have more than a day to spend exploring Hiroshima, here are some other popular attractions that I would certainly recommend adding to your Hiroshima itinerary.

Itsukushima shrine – A world-renowned shrine built on the water which is most well known for its iconic ‘floating’ torii gate. The shrine is located on the island of Miyajima a short distance by ferry from Hiroshima city. I visited during my trip to Japan and it is one of the must see attractions from Hiroshima.

Hiroshima Castle – Originally constructed in 1589, Hiroshima castle was destroyed by the atomic bomb then rebuilt after WWII. The beautiful wooden 5 story castle, which is surrounded by a moat and gardens, is now home to a museum about Hiroshima’s history.

Okonomi-mura – A 3-story ‘food park’ in the city where all the shops sell the famous Hiroshima dish of Okonomiyaki (distinctive savoury pancakes).

Find out more about Okonomiyaki here: Okonomiyaki: One of Japan’s Best Food Inventions

Want to take a tour of Hiroshima?

Seeing the city under the expert guide of a local is often the best way. Here are some of the best rated tours in Hiroshima that you can book in advance.

Hiroshima is located on Japan’s Honshu Island in the South of Japan.

If you’re not staying in Hiroshima itself, the city can also easily reached from Osaka and Kyoto.

From Osaka, take the 15 minute JR ride to Shin-Osaka and from there transfer to the train to Hiroshima which takes 1hr30.

From Osaka, take the train direct for 1hr40. The Japan Rail Pass covers the journey.

Travelling around Japan by train? Check out my post: Guide to the Japan Rail Pass

Getting to the Hiroshima Peace Memorial Park

When in the city, streetcar number 6 will take you to Peace Memorial Park. The fare is 150 Yen each way and is paid when you get off the streetcar. Make sure you have the right money as no change is given.

Where to stay in Hiroshima

Hiroshima Washington Hotel is a centrally located hotel, only a 15 minute walk away from the Peace Memorial Park. The hotel has clean and spacious rooms with lovely views over the city and mountains (try and get a room on one of the higher floors), as well as an on-site restaurant and a generous breakfast buffet.

For a proper Japanese capsule hotel experience, try Capsule Hotel Cube. A fun, authentic and extremely affordable way to stay in central Hiroshima for a couple of nights. The individual capsules are spacious and there is also a common room with sofas and TVs to chill out with the other guests.

J-Hoppers Guesthouse is another slightly alternative option for accommodation which offers dorm-style rooms, as well as private Japanese rooms with traditional bedding on a tatami (woven-straw) floor. There is a communal lounge, shared bathrooms and a self-use kitchen for all guests. The guesthouse is a 5-10 minute walk away from the Peace Memorial Park.

So, that’s my list of to things to do in Hiroshima and guide to Hiroshima’s Peace Memorial Park. Are you planning to visit Hiroshima? Let me know in the comments below if you have any questions.

Check out my other guides to Japan

What to Eat in Japan – 20 Alternatives to Sushi

Where to Stay in Japan on a Budget

I Ate Fugu in Japan and Lived to Tell the Tale

How NOT To Visit Mount Fuji in Spring

Guide to the Japan Rail Pass 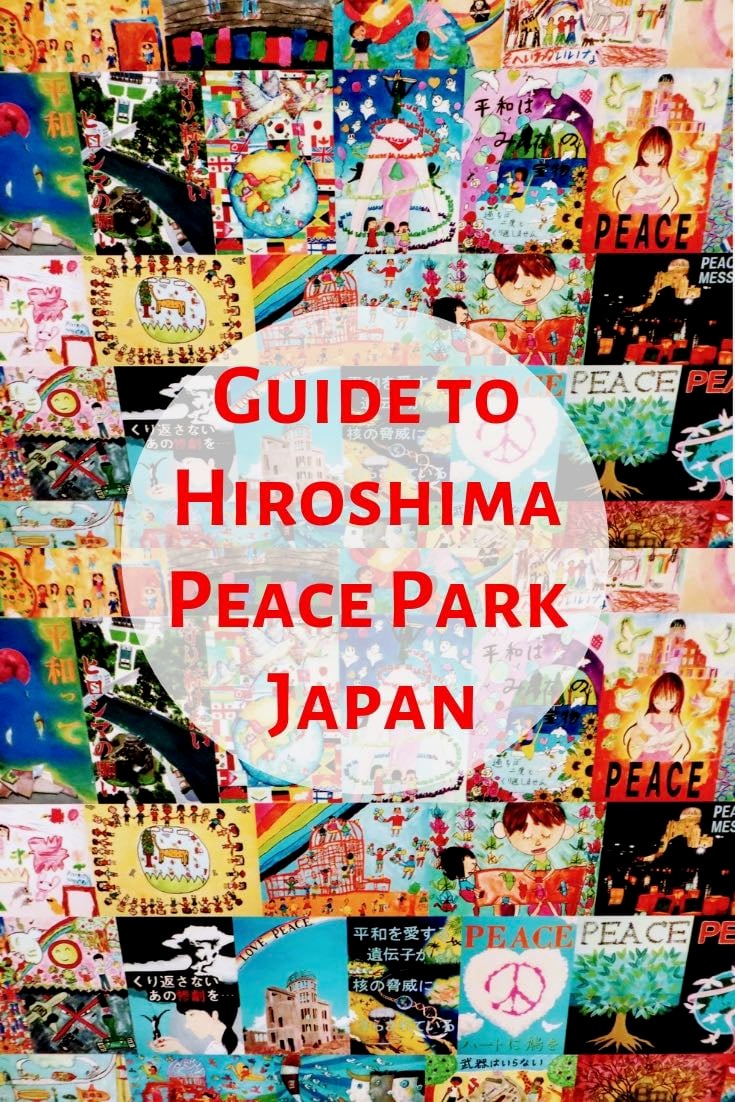