It’s been too long since I wrote about eating in Japan – this time, my favourite discovery: okonomiyaki.

The dish starts by combining eggs and white cabbage to make a omelet/batter type base. It may sounds disgusting, particularly if you have childhood memories of boiled cabbage smells permeating grandparents’ houses, but by the time it is cooked, I promise you can’t taste the cabbage.

After the egg and cabbage is mixed, it’s tipped onto the hot plate.

Then toppings (or, more accurately, fillings) are added, such as…

…bean sprouts and spring onions. The options are endless.

Then, with more of the egg batter poured on top, the pizza, crêpe, whatever…okonomiyaki is left to cook…

The final touch is to coat the top with barbecue sauce, drizzle it with mayonnaise and sprinkle dried fish over it. Sounds weird, but it surprisingly works. The completed dish is served in a small pan with a mini chopping tool to help with the cutting and ultimately devoured with chopsticks. 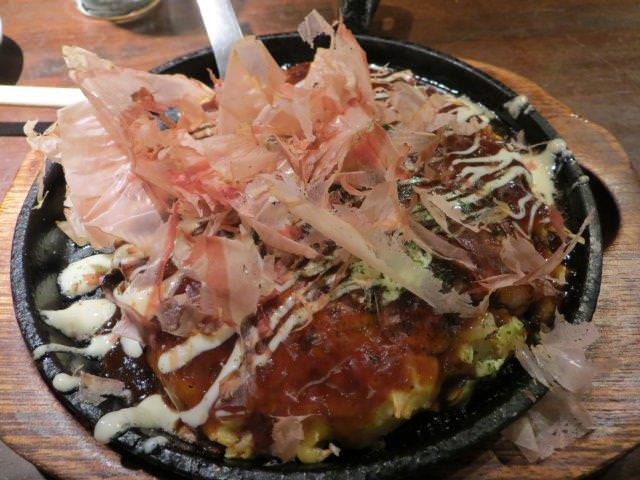 Where is it from?

Although okonomiyaki is a specialty in Hiroshima, it is possible to get it in most cities in Japan including Kyoto, Osaka and Tokyo. If you’re interested in more information about the history of this dish, Okonomiyaki World is an excellent blog on the subject.

The first time I had okonomiyaki I was spoiled – a man behind a hot plate did all of the hard work and an adorable waitress delivered the finished masterpiece to me. However, when I came to try okonomiyaki elsewhere, I quickly realised the cooked and delivered method was the exception.

Handed a bowl of raw ingredients, a hot plate and spatula, I was left to cook my own dinner.

Fortunately, I know my way around a stove, I’d watched closely the master chefs who previously cooked my okonomiyaki and with the help of a simple instruction sheet, I was able to cook up my own dish with some success. I love the patient waiting dog (after my initial fear that he was an ingredient had passed).

The cruel but amazing part was that the instruction sheet for the locals had several more steps that involved stirring the okonomiyaki part way through, resulting in a ‘pizza’ that looked inedible. The locals didn’t seem able to comprehend how the tourists had managed to produce such delicious looking food without much effort.

The finished product – yes, it’s all my own work!

How not to eat okonomiyaki

I feel a small amount of guilt in posting this picture (actually, it’s not the first time I’ve published this – check out my Facebook page), but this Japanese man was a perfect example of how not to eat okonomiyaki.

Reinforcing every stereotype ever formed about drunk Japanese business men, this guy entered the restaurant, ordered what must have been his 15th beer and promptly fell asleep. From time to time he would wake one eye, cut a portion of okonmiyaki and try, eyes now both closed, to deliver the food to his mouth using the sharp spatula. On every occasion, the food fell before it made it to his mouth until, eventually, he gave up and fell asleep.

An hour later, when we left the restaurant, he was still sleeping like a baby. A waste of okonomiyaki if you ask me.

Tip: As much as I like okonomiyaki, I would advise steering away from takoyaki. The clue (yaki!) is in the name. Dough balls filled with goo and overcooked taco (octopus) then drizzled with barbecue sauce and mayonnaise, this gooey dish is a far cry from its much more edible cousin.

2 thoughts on “Okonomiyaki: One of Japan’s Best Food Inventions”