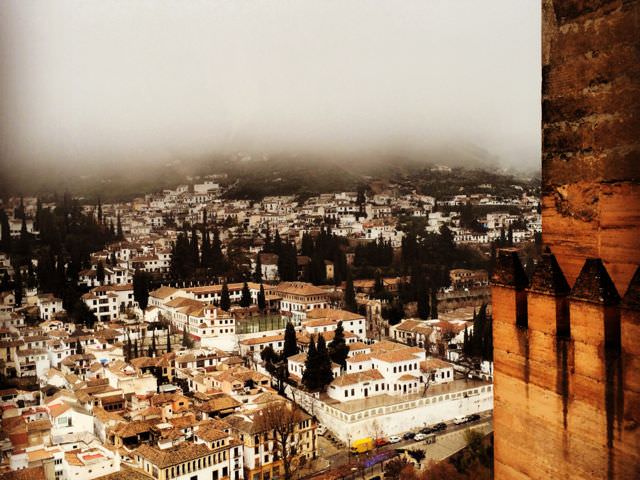 Travelling in high-season can be a bitch. I should know, I foolishly planted myself in Italy for the entire month of July last year and endless queues and searches for beds ensued. Prices were high, street space was low. There. Were. People. Everywhere.

So, it seemed logical (in my tiny mind) to test the converse and travel to Europe in low-season and see what this less popular tourist-time of year might hold. Still in the grasps of winter, Christmas a long-forgotten dream, I flew into Malaga airport on the 1st of February. This part of Spain is known to many Brits as the gateway to the Costa del Sol with its seemingly endless coastline and promise of an annual slice of sun, sea, sand and sangria. Meanwhile, further inland, the broader Andalucian region, with its year-round Mediterranean climate, held the possibility of a much needed respite from the unacceptably cold temperatures of England.

I was excited for my month-long stay in Spain. A wink of sunshine, low tourist levels and an absence of crowds at the sights. It was going to be perfect…except I hadn’t quite considered that there might also be some lows to travelling in low-season.

This week I spent an afternoon traipsing through the sodden grounds of the Alhambra in a relentless stream of drizzle that eventually soaked me to the bone. As I ducked and dove between the limited areas under cover, forever shoving my camera into an increasingly slimy, wet plastic bag, I recalled with sudden clarity that I’d made this low-season travel mistake before. More than once, but most memorably by visiting the Taj Mahal during monsoon.

It should have been a memory that lingered at the front of my mind during the trip planning stage of every subsequent adventure, but the positive buttons in our brains don’t seem to work that way. So, for the benefit of those about to dash out and bag a low-season ticket (and for the benefit of my future trip-planning self), here’s a run down of the highs and lows of low-season travel.

The highs of low-season travel

The upside of travelling out of season are pretty obvious to most tourists, but let’s quickly list them:

The lows of low-season travel

Sounds like a sweet deal, doesn’t it? In fact, it’s enough to make you wonder why we don’t all travel low-season, all the time?

Here are a few reasons why…

The lack of crowds

Yeah, I know I spent the whole of last summer complaining about the cruise-crowds that filled every corner of every Piazza in Italy, and perhaps the biggest upside of low-season travel is the lack of crowds. However, there is also something to be said for having some company.

Even if you’re travelling with friends or a partner, empty hotel lobbies, dormant dorm rooms and tumble-weed whistling over ancient cobbled streets can leave you with the feeling that you’ve walked onto the set of the Shining (Steven King reference in case you’re not sure).

Travel in low-season may have evaporated the masses and I may have been able to grab a next-day ticket for the Alhambra (a practise close to witchcraft is required to do that in Summer), but there is something rather solitary, desolate and little bit desperate about wandering around historic centres or beach towns when nobody else is about. Spain’s cities have been better, offering a more constant buzz, but when I turned up in Cadiz, I was the first guest of the season at my accommodation and the manager opened the door with a tin of paint in his hand.

Mediterranean climate, my ass! I’ve honestly seen as many grey days in Andalucia as I would expect to see in England this time of year. I accept that the temperature is a couple of degrees higher, but I’m also a couple of layers shorter, having traded my winter coat for a windbreaker and my thick thermals for lightweight jumpers. I’d been mis-sold on the weather and the constant reassurance that “it’s really unseasonably cold” has done nothing to change my mind from thinking I’ve been duped.

Low-season in most destinations is commonly defined by that period when the worst weather is prevalent. Sure, it may still be warm in the Maldives in May but days of rain are going to but a dampener on your sun-lounging trip. Likewise, that bargain deal to Bulgaria’s slopes just beyond the end of the ski-season is unlikely to pan out too well either.

Closed or reduced hours at attractions

My out of season trip to Mount Fuji last year was a good taster of what can happen when you turn up at the right place at the wrong time of year. And things seem to be worse in Europe. With a lack of crowds and lousy weather, beach areas all but shut down for the season, major attractions are subject to limited opening hours (which I’m personally finding a bit of a drag as a late riser) and, as frustrating, low-season is also a popular period for essential maintenance and renovations.

Restaurant businesses aren’t immune either. With a reduced level of tourist income in locations that thrive off visitor spending, there is hardly a strong motivator for restaurants to keep their doors open seven days a week. I’ve encountered almost as many closed restaurants as I have open ones during my time in Spain…ok, that’s definitely an exaggeration but there were slim pickings in some of the smaller towns I have visited and a handful of places I’d researched and wanted to try were firmly closed when I turned up (leading to an angry appetite more than once).

Arguably the biggest risk (for your taste buds) when a restaurant isn’t gaining coach-loads of customers is that owners might be more inclined to turn to less than fresh foods. My tagine the other night comprised frozen vegetables (sliced carrots and peas…please?!), I’ve suffered through sad dishes that would have been much better were they not cooked in last season’s oil, and I’ve been delivered more than one dish fresh from the microwave. Sure, this can happen year-round, but I’ve noticed a significant reduction in the number of enticing kitchen smells (an indication of fresh cooked food) while I’ve been wandering the streets of Spain during low-season.

The hotel situation in low-season really is a double-edged sword. There was more staff at my hotel in Ronda than guests and with many hotels shutting-up shop for the season, choice can become limited. Of course, all of these arguments lose their significance the second you manage to score a four-star hotel for under $50 a night. I can learn to live with lonely at that price…but never for too long.

I waited for what felt like a short decade in Tarifa’s wind-surfing gales for the bus to take me to Gibraltar. After two scheduled buses failed to show, I gave up. During the same time, two unscheduled buses to an unscheduled destination passed me by.

In short, public transport can be somewhat sporadic and rather random during low-season and I wouldn’t even approach the word reliable, particularly in smaller towns. Getting around in low-season can feel like an exercise in testing your patience – you have to accept that it will happen when it happens…as well as the possibility that it won’t happen at all.

I know exactly the number of greyed out, dull photographs I have on my camera from this low-season trip: precisely all of them except for the dozen I took the other day in Sevilla when the sun graced me with it’s presence for the afternoon. I couldn’t (read: wouldn’t) walk into Tajo Gorge because of the rain and during my one night in Cadiz, the wind broke my umbrella within seconds of me stepping out of the door. Needless to say, the rain soaked me through in the same time.

In towns where the main sights are outside (beautiful plazas and gnarled streets are the real charm in many European cities), poor weather can be a real bummer. As I mentioned, I visited the Taj Mahal in low (monsoon) season. The rain wasn’t such a chore because of the heat, but instead of the gleaming white building most people capture on their cameras, my lone picture is a mass of dull white – the Taj, the sky and my even my face blend into blankness. All that way for such an anti-climax.

How to make the most out of low-season travel

So, there definitely are some downsides to low-season travel but it doesn’t mean that you can’t enjoy a cost-friendly jaunt to a place during a sub-prime time of year.

Here are a few ways to make the most out of any low-season trip.

Decide how vital the weather is for your trip. If you’re going on a beach break, don’t just look at temperature, look at rainfall and monsoon or hurricane risk

Pack right – as my uncle says “there’s no such thing as bad weather, just the wrong clothing” – check the weather and pack accordingly (like I wish I’d done!)

Do your research – make a list of what you want to see, places you want to eat and areas you want to visit and make sure they will be open while you’re there

Use trains instead of buses – train schedules are usually more reliable than buses. Just plan your trip because hours can pass between buses and trains.

Consider car hire – if you have the budget, some good deal can be had on car rental in low-season.

Stay flexible – I planned to spend a few days in Cadiz but the weather wasn’t with me. As I’d only booked one night, I moved on to Sevilla the next day, which has much more to do in the rain.

Ultimately, whether to travel in low-season is a case of trade-offs. You may well get wonderfully low prices on hotels and less crowds but being somewhere out of season is not without its downsides. Of course, the real trip is travelling in the shoulder-seasons – the month or two that abuts the high season, but that’s another topic entirely.

I’m enjoying my time in Spain, but on balance, I’d take a scorching summer sun with a tourist’s elbow in my gelato any travel day.

Have you ever travelled in low-season? Are you a fan or have you have any travel disasters or disappointments as a result’s.

13 thoughts on “The Highs and Lows of Low-Season Travel”