If you’ve reached my site because you are searching for sex tourism in the Gambia (and my site statistics tell me that a fair number of you are), I’m afraid you have come to the wrong place. However, please read on before you click-off. Sex tourism is a complex subject and the following represents my views, but I urge you to consider them in the hope that the lives of many, yourself included, can be improved by more thoughtful consideration of this issue.

The Gambia is a small slither of land than carves up the greater mass of land that is Senegal in West Africa and to look at the tourist brochures you’d think it held little more than the innocence of virgin beaches. Yet there is nothing virginal about this country, where sex tourism is sufficiently rife to give Thailand a run for its money.

A Different Game: Female Sex Tourism in The Gambia

Unlike Thailand, however, sex tourism in The Gambia isn’t raging with 50-something Western men paying to get their rocks off with seemingly barely pubescent Thai girls. In The Gambia it is middle-aged Western women that are throwing down rolls of Dalasi, the local currency, in exchange for a grapple with the firm bodies of the young Gambian men.

I have not led a sheltered life and my friends would place my behavior closer to sinner than saint. Consequently there is very little that tends to shock me, but the extreme levels of male prostitution in this country have done exactly that.

I did little research before coming to The Gambia other than to check it had an under 7-hour flight time from the UK and had sunshine in March. The images of eco-lodges promised lazy days idling in a dug-out canoe and temperatures capable of changing my skin from grey to pink appealed. Add to the fact that Africa is on my travel wish list and I booked without much further thought. Tickets were purchased and travel took place four days later. Had I planned a bit more I would have realized I was wandering into a country that has a dark side shady enough to blot out the sun.

For two days I grappled with some unfinished work, caught up on some missing sleep and lay horizontal on the beach for several hours turning only with the shift of the sun, but last night, with the company of my good female friend and travel partner, I ventured out.

The very use of the word Strip used to define the street with bars and restaurants was enough to inspire shudders as banished memories of trips to Spain riddled with Brits Abroad hit my mind. However, craving something more lively than the promise of bingo with the geriatric holiday-makers and a cup of Horlicks that awaited at our hotel, we hit the Senegambia Strip and were taken completely by surprise.

In hindsight, the hints had been there – we had already been warned to avoid the local ‘Bumsters’ that hang around the beach and outside hotels willing and able to offer any service you might imagine from tour guiding to fruit selling to picture taking. However, it wasn’t until we sauntered down the Senegambia Strip that it dawned on me that the offer from several Bumsters to experience ‘The Real Gambia’ might well have had illicit undertones.

It wasn’t the only warning sign – the night before we had giggled like adolescents at the sight of two fellow female hotel guests flanking a good looking local guy all but dragging him back to their room, his feet barely touched the ground in cartoon fashion as they marched. It was a sight so absurd and irregular we dismissed it as the quirky behavior of the curious looking Scandinavian girls. Sadly, such behaviour wasn’t uncommon. 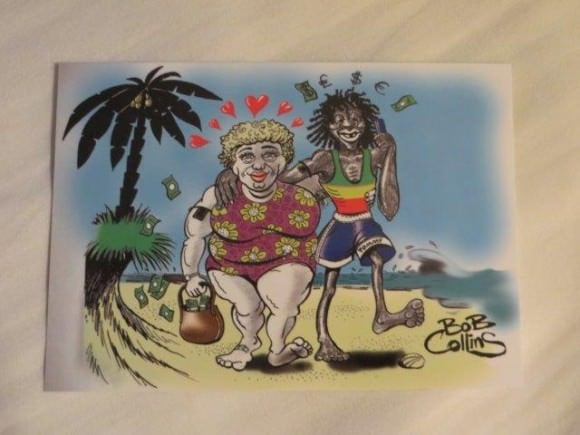 As we sat in a restaurant last night feasting on good, local humus and awaiting the local reggae band our eyes peeled increasingly wide as one unlikely couple (or triple) after another took their seats. There were two consistencies – the youth and good looks of the local guys and the unattractiveness of the Western women who most likely fit the bill of social outcasts back home.

The first example we saw was an obese German girl who looked like she had escaped prison. She smoothed her hands with greed over the firm body of a black man that was so slight he must have weighed in at a small fraction of the kilograms of his date. Two tables over a pair of females perched on the wrong side of their 30s and looked set to share a buff man so slickly oiled I had to wonder if they would get any traction.

To our left a woman plied her young man with drinks and whispered hell-knows-what into his ear while a woman I assumed to be her mother sat across from the ‘love-birds’ staring into a middle distance that had to be preferable to the reality in front of her.

On the dance floor, a lanky guy with funky dreadlocks bounced to the beat while a mid-fifties woman shuffled from foot to foot in the way only an aunt at a family wedding can, no eye contact passing between them but the inevitability of a night (or an hour) together a deal already done. And that was not the worst of it.

My friend spotted it first – a women slowly entered the restaurant, her Zimmer frame squeaking across the concrete floor. Slowly, she took a seat opposite another example of tragedy – a young Gambian guy ready to spend a night trading Dalasi for his body.

As the night unfolded and the dancing increased, paranoia circled. We were two single white Western women of an age that could no longer be considered our twenties and we fit the profile of Sex Tourists perfectly…save for our complete unwillingness to participate in such a vile form of exploitation.

With paranoia ramping up, I pulled my cardigan closer across my body and stopped making eye contact with the men. An invitation to dance, an opportunity to meet new friends – usually innocent encounters, but not in The Gambia.

The Great Debate: Is It Wrong?

We spent our entire night engaged in debate about the issue. Few people would disagree that the situation in Thailand is unacceptable as young girls and women trade the sanctity of their bodies for the necessity of money. But is the situation different if the person selling their body is male? Is it really a problem? I’m sure many of the women involved in The Gambia’s sex tourism justify their actions on the basis that the men get to have sex and get paid for the fun of it, so is there really any harm? It’s certainly one theory.

Our conversation extended to the waiter, the taxi driver on the way home and a number of locals at our hotel and the answer was consistent amongst us – a resounding yes: it is a problem and there is harm. Any ‘relationship’ that is born out of need rather than want is exploitative regardless of whether it is a man or woman paying for sex. And of the many pairings I observed last night it is hard to conceive any scenario where the men involved would willingly select the abominations that were their highly unmatched pair.

Prostitution is a profession as old as time and the smallest part of me takes some controversial comfort in the idea that sexual equality has progressed to the point that women now have sufficient power to exchange cash for sex. Yet there is a much bigger problem that persists and one that makes me sick to my core – the enduring exploitation of people from ‘poor’ countries (The Gambia and Thailand to name just two) by those from richer nations (Europe, the USA and Australia amongst them).

I don’t suppose for a second that I have the power to end prostitution, but I can spend my Dalasi wisely, encouraging a different, more wholesome kind of tourism by using local tour guides, buying fruit from the beach sellers, eating in local restaurants and investing in handicrafts.

Tonight we have an invitation from two Gambian guys to a nightclub where a famous Jamaican DJ is playing. Would we like to go? Yes. Did we consider the preferential position of going under the company of two men and therefore warding off the advances of many? Yes. Did we decide it was much easier and far less risky to stay home alone with our own club beats? Yes.

There’s More to The Gambia Than Sex Tourism

The Gambia is a very beautiful country with many men and women earning a living outside of sex tourism. It isn’t my intention to put you off visiting, only to tell you what your tour operator usually won’t – that there is a darker side to life in The Gambia. However, with the assistance of a recommended driver or tour guide, it is perfectly possible to enjoy a sex tourism free stay in this beautiful swatch of Africa. I know, because I intend to do it!

Where to stay in The Gambia

I stayed in Kombo Beach Hotel and I’d have no hesitation recommending this place. Clean, well located, safe and with great staff and facilities, Kombo Beach Hotel is a great option and is within the top 10 hotels in the Kotu (tourist) area (according to Trip Advisor).

If that doesn’t take your fancy, you can find the full list of top 10 hotels on Trip Advisor. Senegambia Beach Hotel, Sheraton Gambia Hotel Resort & Spa and Coco Ocean Resort and Spa were all on my short list.

Planning your trip: I used the Lonely Planet Guide to the Gambia and Senegal. Although it’s not filled with pictures, it’s got all the details you need including the main sights and local maps.

Update: During the rest of my trip I did go sightseeing. You can read about my experiences here:

A Day Exploring the Sights of The Gambia

The Gambia’s “Roots”: When Good Intentions Lead to Bad Tourism

And if you’re looking for a really local experience, you can try a full-day Gambian Home Cooking Experience.

66 thoughts on “Let’s Talk About Sex: Female Sex Tourism in The Gambia”