This post is about visiting Semuc Champey (or, rather, how NOT to visit Semuc Champey) and is part of my First Time Around The World Series…

Semuc Champey was the word on everyone’s lips in Guatemala. I mean EVERYONE! Never mind Antigua or even Tikal, visit Semuc Champey was THE thing to do, apparently A-mazing, and even if that non-descriptions didn’t draw me in, I had realised one things about backpackers – they don’t spend their travel bucks on anything unless it is necessary (arm falling off…cold beer needed for pain) or, well…amazing.

If I’d found out a little but more about this wonderful destination before simply deciding on a whim to amend my non-existent travel plans and visit Semuc Champey, I’d have realised that it (and neighbouring Lanquin) was not a Champagne district to rival Reims, France, but is instead riddled with stepped turquoise pools, waterfalls, large limestone caves, fast flowing rivers and limestone bridges for jumping into aforementioned fast flowing rivers. Perfect if you like water. I don’t.

Central America is so tiny, especially if you’ve immediately preceded your visit with a stint in South America, which I had. This can cause the crazy misperception that most places can be got to with relative ease. Not always the case. Semuc Champey is perhaps best described as being in the deepest darkest depths of the middle of Guatemala’s nowhere, otherwise known as the department of Alta Verapaz. Look at it on a map, and it’s easy to sniff at the distance but as this natural beauty spot grows closer, the road presence diminishes and travel becomes infinitely slower. Why don’t maps ever tell you this?

Don’t take the 2pm bus out of Antigua

The upside of the growing popularity of visiting Semuc Champey is that some entrepreneurial Guatemalans have kindly put on a twice daily mini-bus which will take you directly there without having to practice the witchcraft of connecting local bus times.  The downside was the patience of the bus driver who was clearly under instructions not to leave Antigua without his full complement of backpackers who, meanwhile, seemed incapable of being in the right place at the right time. Consequently, we circled the main streets of Antigua (of which there are two) for hours before everyone was finally rounded up.

Finally on our way we drove mere miles before hitting traffic – unsurprisingly, approaching Guatemala City at 5pm on a Friday night is not conducive to a quick passage. Three hours later and just beyond the city limits, our driver’s growling stomach (audible through my headphones) indicated a dinner break. Eight pm and we’d travelled a distance we should have nailed in 40 minutes. It was going to be a long ride.

Darkness had fallen as had the sky’s precipitation (cue: silent prayer to the efficacy of the rain cover wrapped around my bag on the bus roof) and 12 bladders were simultaneously triggered. We were still two hours away from our final destination, assuming the road conditions didn’t worsen (cue: denial) and the last thing we needed was an impromptu stop in an unknown town, but bladders can rarely wait…especially when unpaved roads are involved.

A man trained in the magic of Derren Brown materialised from the shadows and, with a devious eye, opened the door to one of his vacant hotel rooms. Presented to the weary travellers was a gleaming, soft, dry, roadless promise of bed. I knew I could get to my emergency credit card in minutes, could almost feel the plastic between my fingers, but I knew I shouldn’t. I’d found that getting to the middle of nowhere that was Semuc Champey was difficult enough. The likelihood of finding public transport from Town Unknown to the middle of nowhere that was Semuc Champey the next day would require more than witchcraft. With a begrudging wave goodbye to the prospect of a dry bed and heaving a heavy heart, I got back on the bus that had become the seventh circle of Hell.

If you’d rather book your tour in advance, Viator has three tours that take in Semuc Champey:

You can visit Semuc Champey as well as Coban on a three-day trip from Antigua. The same trip is also offered from Guatemala City. Or, if you’re happy to get yourself to Lanquin/Semuc Champey, you can book a day trip to see the caves and stepped pools from Lanquin.

Alternatively, Intrepid Travel has almost 20 trips that take in Guatemala. You can see the tours here.

Although I haven’t taken these specific tour, I’ve used both companies and would happily recommend them.

Dirt and mud took over where gravel had been, acting as a final indication that our destination had been reached.  Somewhere en route, the pitch dark and unrelenting rain appeared to have robbed the driver of his remaining patience as he came to a sharp stop and told us to get out.

Now, call me stubborn, but I had paid for a ride that would take me to the door of my hostel and apart from a small spit of stores, no accommodation was in sight. Nor were there any other means of transport. It was 1.30am and flashing with torrential rain. I was mapless and the stretch of road was nameless. It spelt nothing other than a night of ambling lost or sleeping on a doorstep. Fortunately, several years (or decades, who’s counting) of practising persistence paid off as I stayed rooted to my seat. No sign of wavering and refusal to engage in eye contact (key tactic) and the disgruntled bus driver eventually hopped back into Hell-on-Wheels and took me to my hostel…another 20 minutes drive away.

My first experience of El Retiro wasn’t good. I was cold, wet, tired and numb from the road shakes and, bizarrely, managed to turn up at the same time as 30 other people. Late night check in wasn’t uncommon in these pars. However, despite getting to the front desk first, I was left sitting soggy in a corner while the apparently premium guests were processed. I was not happy and vowed an early departure after a long promised sleep.

Sometime between the night ending and the sun rising, the weather had given way to marvellous sunshine and throwing open the door of my dorm I realised that Hell-on-Wheels had transported me to Heaven-on-Steroids. A forest of greenery, twittering birds, foraging wildlife, a flowing river and thatched roof huts filled my panorama. I blinked. I had woken up in something created by Disney meets Attenborough. Bliss. Skipping (for the first time since I was 7) I headed down to the restaurant for breakfast where the magic continued – banana pancakes, river views, hammocks, bathrooms with shell adorned taps. I wanted to question how El Retiro could have dorms, but I didn’t want to jinx the gift of this accommodation.

(Update: although I haven’t stayed there, I hear good reviews from other travelers about Zephyr Lodge.)

Alternatively, I’ve also got the Rough Guide to Central America and on this occasion, I think it gives the Lonely Planet a run for its money – plus, it’s a couple of years more up to date.

Each time I went to the restaurant, things seemed to get better. Lunch outdid breakfast and dinner beat them both hands down. Yes, the communal evening meal is comprised of a buffet, something I usually associate with the painful dullness of business conferences where chefs reach new lows in serving dehydrated consistency. However, it’s not simply the food that puts me off communal mealtimes. It is the continual game of pass the peas that seems nothing more than a social experiment to divvy-up the diners – the greedy (note: over filled plates), the picky (nothing touching on the plate – get that salad away from my beans) and the depressed (mashed potatoes on one half, trifle on the other).

Somehow, however, the usual buffet practises had been silently outlawed at El Retiro. First: there was more taste to the food than I’ve sampled in many fine restaurants. Second: everyone happily fell into the greedy category. The food simply demanded it, as did the price – the fill up as many plates as you want policy was backpacker Nirvana. An endless supply of food and a capped cost. Communal dining had been redefined.

The other contributing factor that made El Retiro’s evening meals so successful was the good sprinkling of rum based cocktails. As the bell above the bar rang out happy hour…every hour, drinks were purchased in two, drinking buddies were found, travellers’ tales were shared, toilet stories were swapped and new friendships were formed. One happy hour would come to an end marking the start of another and the drinks went down quicker than the stories could come out. Person after person regaled me with descriptions of the AMAZING things I was going to do the following day on my tour of Semuc Champey. My heart beat with excitement…or too much rum.

Suddenly it was 3am, which I had become accustomed to spotting by the quality of the dancing, and I remembered that I had to leave at 7am for my trip to the caves. Unlike Cinderella’s elegant yet dramatic dash at the very strike of midnight, my exit was more of an ungainly, reluctant stagger a few hours too late fearing a lack of sleep and over-indulgence would not spell great things for my day of rushing water that lay not too far ahead.

…to be continued in Semuc Champey Part 2.

Where to stay in Semuc Champey

On a budget: I stayed at El Retiro, mentioned above but since then I believe Zephyr Lodge has taken over as the backpacker favourite since then.

For hotels: Although both of the above hostels have private rooms, if you’re looking for an alternative, a few hostels have popped up in the area and you can find them listed here. Do double check before you book – some of the hotels are located in Coban, a 60 mile round-trip to Semuc Champey. 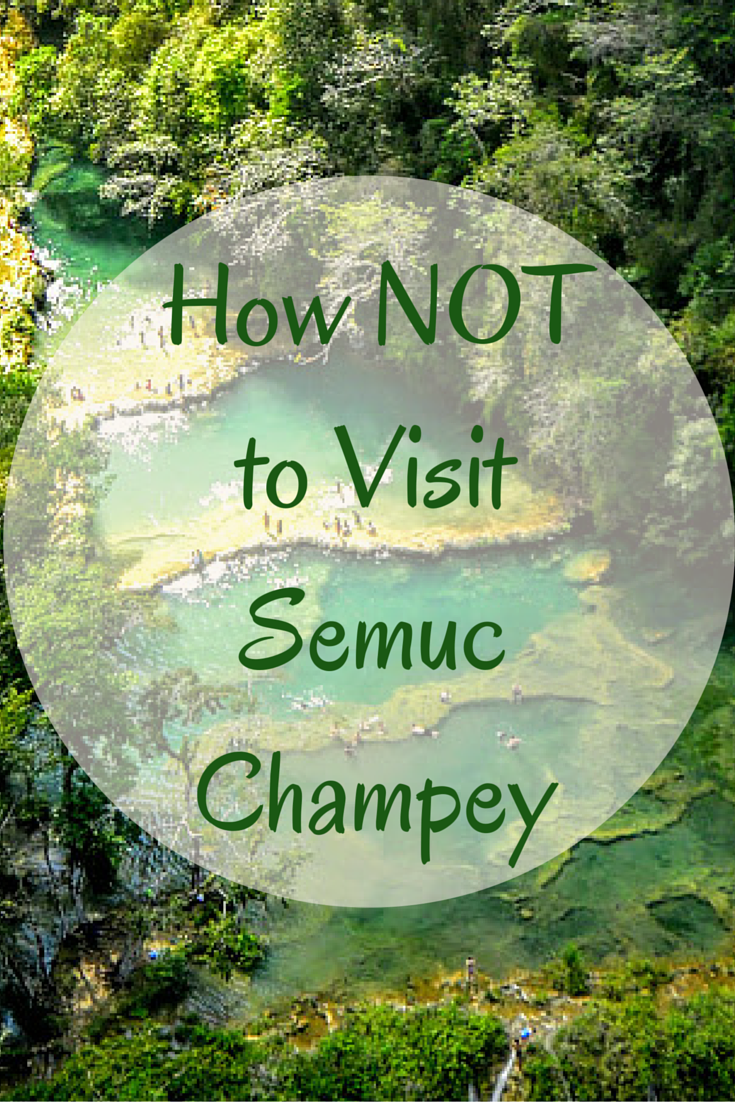