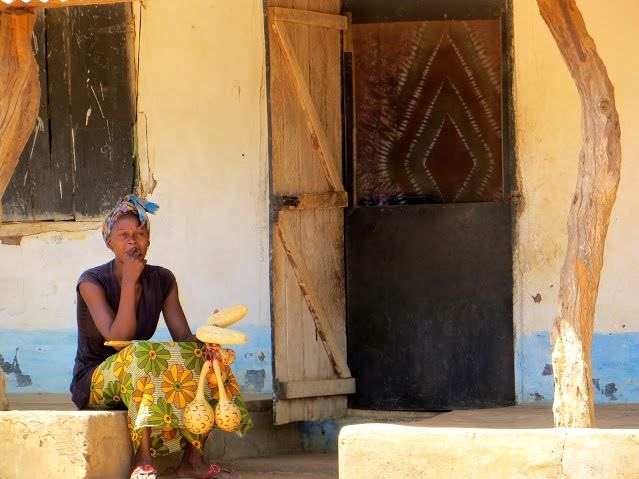 “I bet Alex Haley would turn in his grave if he could see this village now,” I whispered to my friend. We were sat under the cover of concrete and the King of the village (who happened to be a woman) was presenting certificates for sale. They were simple photocopies on plain A4 paper serving as a memento of a trip to the village Juffureh.

The cost was less than £1, a price I, like most tourists, could easily afford, but that wasn’t the point. Unlike most of the tourists before me, there was something I needed to know – where did the money go? I turned to my guide and, as quietly as I could, I asked. What I wanted to hear as I watched visitor after visitor swapping pounds for paper was that the money was divided up for the benefit of the community. But even in the short walk from the dock to the King’s den I’d witnessed a broader diversity of wealth (or, rather, poverty) amongst the people of the island than I’d expected.

Keeping his head low and his voice lower, my guide confirmed my suspicion. The money from the certificates went straight into the pocket of the King who, at that moment, just happened to be looking at me with a stern expectation that all but commanded I open my purse. With a deep breath for resolve, I smiled as kindly as I could and politely declined the deal. Without a flicker of reaction, her glare moved on. 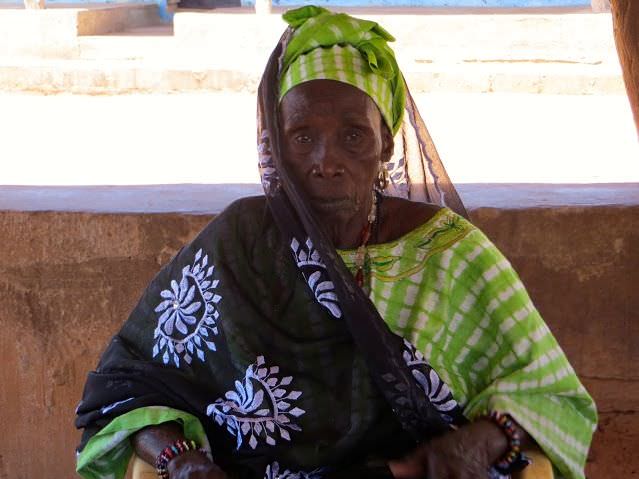 More than 30 years have passed since African-American author Alex Haley took a searching journey from his home town of Henning, Tennessee, to trace his ancestry. It was an exploration that ultimately led to Jufurreh, a tiny village on the north bank of The Gambia River. There he met descendants of his great-great grandfather, Kunta Kinte, who was forced into the slave trade in 1767.

A Pulitzer Prize lay down the line for Haley as did a forever changed future for the village and Gambia tourism. 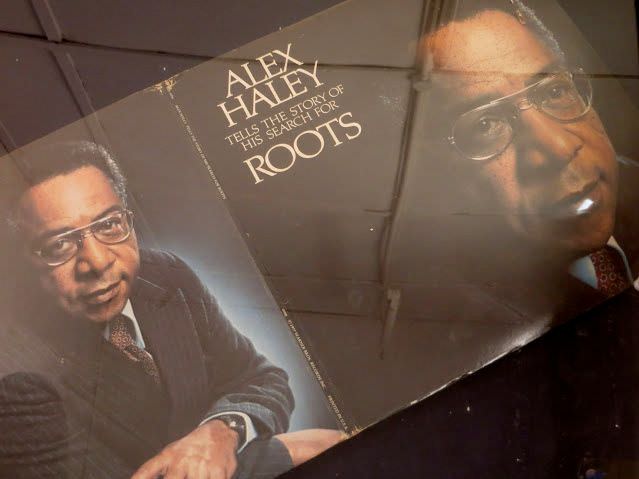 Over 6 million copies of Haley’s book, “Roots: The Saga of An American Family” have been sold and during peak tourism season in The Gambia, it feels like every single one of those readers has stepped foot in the village. It is an exaggeration, of course, but a century after Kunta Kinte was stripped of his heritage, Haley’s inspirational account of his family’s history has inspired others to walk in his footsteps…by the boat load.

It was a volume of footfall that left me shifting awkwardly in the heat, attempting an exchange of smiles with the local villagers and largely wishing I was anywhere else. Although it is no great surprise that Haley’s journey would come to be emulated by those who visit The Gambia, and the country can hardly be blamed for capitalising on the fame that Haley bought to its shores in the 70s, roll forward three decades and the effects of excessive Gambia tourism (“Roots” tours are sold on every street corner that features a hotel) are showing, and sadly not in a good way.

A new breed of Juffureh tourists 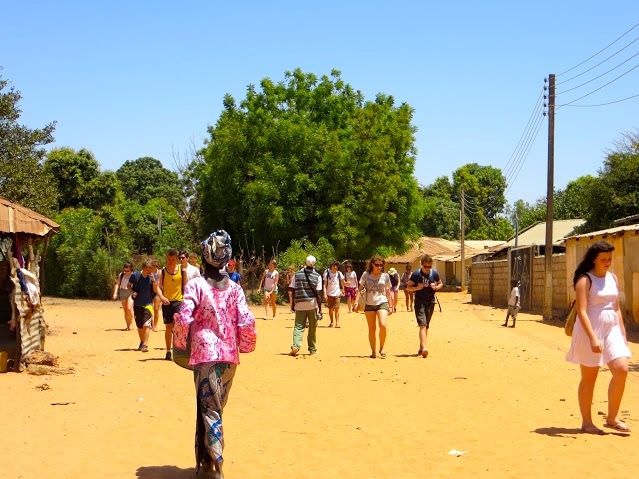 Wandering from the King’s den towards the small market dedicated entirely to handicrafts, it is clear that Juffureh’s “roots” as a small fishing village have long been surpassed by tourism as the main source of income. For a time, I’m certain this was a good thing as basic enhancements came to the village in the form of water and light. Courtesy of Haley, the popularity of his book and its spin-off TV show powered tourism in the village until the mid-90s bringing a valuable source of income with it.

However, as the freshness of Haley’s book faded and the number of visitors dwindled, so, it seems, did the calibre of the tourists. I, like many visitors, had decided to take a group tour to the village, complete with return boat trip. At first our group was a manageable size with around 10 people but waiting at the docks in Barra we were rapidly joined by around 40 or 50 more.

Listening to the conversations on the boat heading to the island, I quickly got a sense of the type of tourist endeavour I’d joined. Many of today’s visitors who engage in Gambia tourism and visit Juffureh take a “Roots” tour as little more than a tick on their list of activities in The Gambia, their visit inappropriately sandwiched somewhere between pre-dawn bird watching, an evening of chicken yassa and the ongoing finger count of tanning days left until their charter flight takes them home. 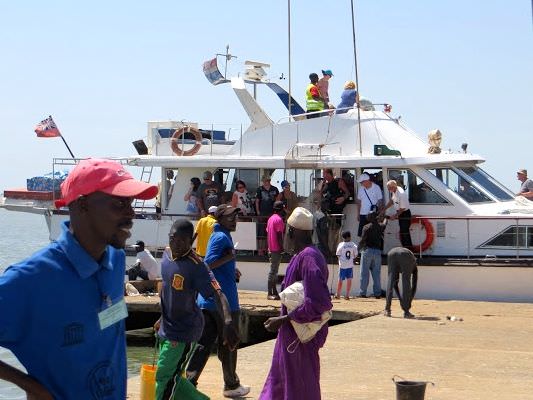 With little historical or emotional investment in the village, the present day mass of tourists can, sadly, afford a take it or leave it attitude to the community. This was visibly demonstrated as the majority of visitors in my vastly over-sized group wandered through the streets with passive intrigue, or, worse, pity.

The attitude of this new breed of tourist sits at odds with the community’s inherited sense of entitlement that was stamped on the village by Haley, leaving the residents stuck somewhere between fame and fortune trying desperately to capitalise on the inundation of attention they never asked for but now seem unable to do without. 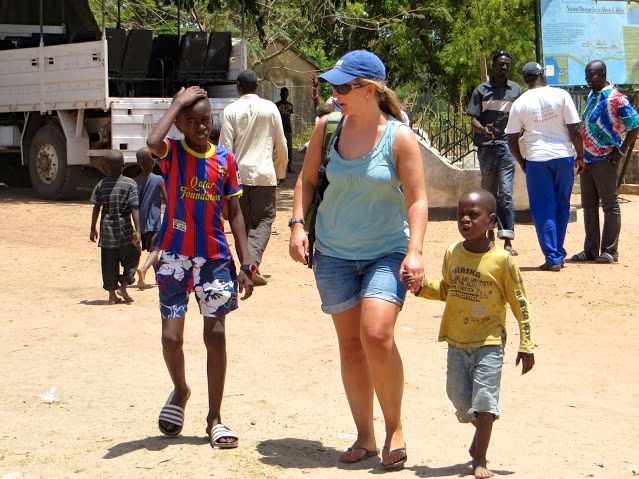 Unfortunately, this situation has translated into persistent begging, hassling and outright aggression that comes free with every interaction. Children are absent from school and bold enough to stalk you through the streets, hoping to seize on any tourism opportunity, crying out for sweets, books, pens, footballs or just plain old cash. With wide, pleading eyes, or a more visceral tug by a small hand slipped into yours to supply a brief bond, I was sadly sceptical that these charming practices had been perfected over time.

Shadowing us from the second we stepped onto the village banks, continually saying no to the children’s incessant begging was difficult. Sadly, my refusal was met with contemptuous scowls, the young beggars and touts not having perfected the skill of accepting rejection graciously – but why should they? They are children who have needs and who have been dragged prematurely into the modern tourism ways of this once traditional village.

Doing the best I could in the circumstances, I agreed to visit a handicraft stall run by one of the villagers. 500 Dalasi, I was told as I suddenly found a set of rudimentary lacquer bangles around my wrist, effectively shackling me to the shop. They were pretty in their simplicity, but at a cost of around £10, the price was extortionate even by the British High Street’s standards. Just about able to free the bangles from my wrist, I was once again left fighting off local anger as I started to walk away.

Unfortunately for me, the sales lady didn’t accept rejection well or, indeed, at all, and began to follow me down the street, her hand pulling on my arm as we went. Despite my significant experience fending off vendors in local markets around the world, I saw a fierce determination in the lady’s eyes. Recognising that her will was greater, I fractured under the pressure and agreed to buy. Some 15 minutes of hard bargaining later, I fled with my new (still way over-priced) bracelets, my one concession to the tourism trade in Juffureh, and one that I hoped was the least damaging.

The Juffureh slave trade museum (and my city’s shame) 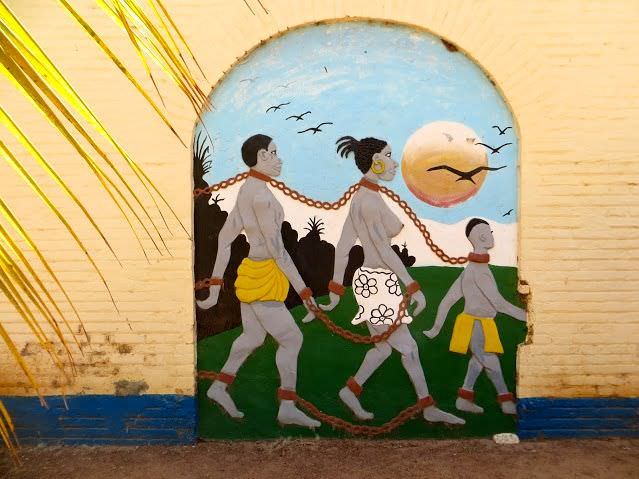 Walking from the handicraft market, I soon found myself at the slave trade museum. It was one of the main reason I’d wanted to visit Juffureh.

Slavery was a subject I’d learned a lot about growing up in Liverpool. The confluence of my home city’s coastal location and the timing of the completion of its commercial docks in the early 1700s unfortunately positioned Liverpool as a hub for the slave trade. Shockingly, by the end of the 18th century, 40% of the world’s and 80% of the British Atlantic’s slave trade passed through Liverpool’s ports. 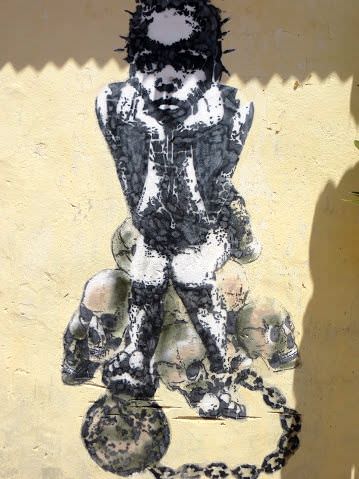 With the cloud of my own city’s shame hanging above my head, I spent a long time in the museum in Juffureh examining every last piece that was on display. Slowly, I wandered through the small space that clearly documenting how The Gambian people had been kidnapped and sold around the world as simple tender for such irrelevant luxuries as sugar and rum. 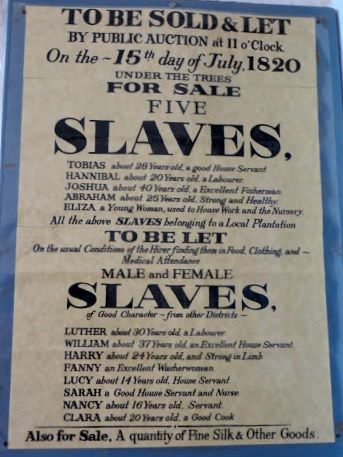 I grew more sad as my trip around the museum progressed but I came to realise I wasn’t just bothered by the evidence of the slave trade. It was the increasingly large stream of tourists who strolled into the museum showing little interest or concern beyond hiding from both the hassle and the heat outside.

Staring at the framed portrait of Haley, I can well understand his urge to find Juffureh, but as I watched tourists clicking cameras with detached apathy, I was angered on a new level and headed back to the dock. 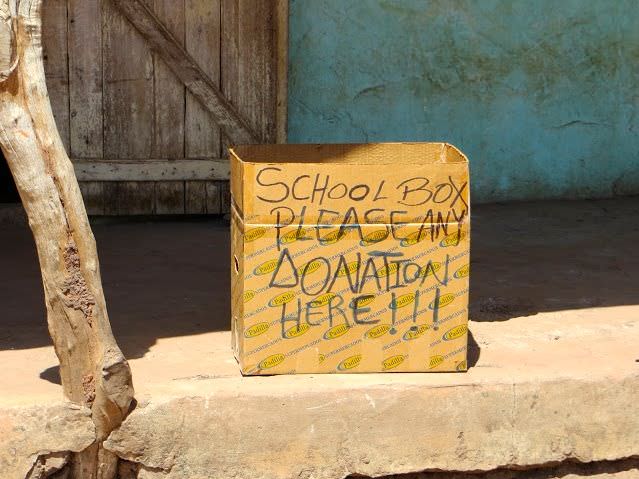 There, I meet one of the guides and noticed that his dissatisfaction seemed to mirror my own. Together, we stood for several minutes in silence watching well-meaning tourists buying up piles of pens, pencils and sweets before depositing them in the conveniently located donation box.

“Do the books make it to the school?” I asked, breaking the mutual silence. My deep down suspicious was that the freshly purchased items would be placed back on the “for sale” table (ready for the next tourist influx) before our boat had even become a dot on the horizon. The guide paused before he answered, presumably searching for the right words. “The best way to donate to schools in The Gambia is to visit any other village than this one.” His response indirectly told me what I need to know about the trading style of Juffureh.

As we sailed back to Barra, thoughts of Juffureh lingered and I couldn’t help think that although the village may have escaped the harsh shackles of the slave trade, the tourist trade is no kind master either. About half way into our return journey, a school of dolphins joined us, skipping freely through our wake making me think once again about the people in the village, making me hope that one day they can find a rewarding, consistent and sustainable form of income that permits them a similar type of freedom.

Gambia Tourism – How to be responsible

Want to read more travel articles for Africa? Click below. 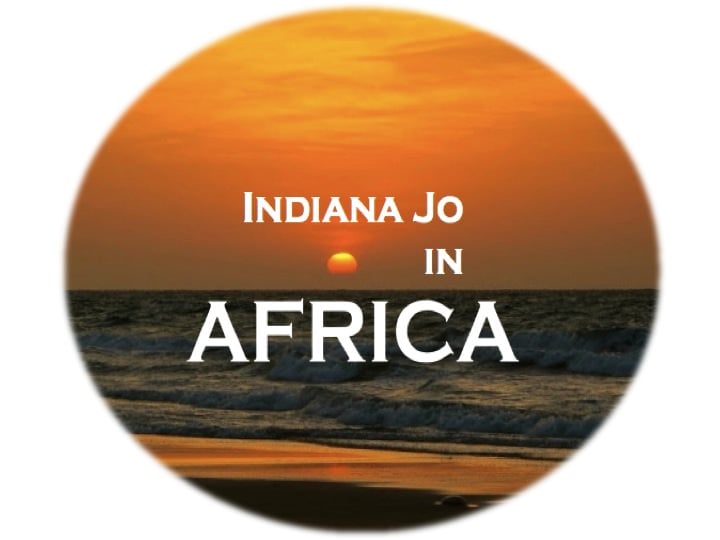 19 thoughts on “The Gambia’s “Roots”: When Good Intentions Lead to Bad Tourism”