Home » Blog Posts » Destinations » South America » The Equator, Quito: Journey to the Centre of the Earth 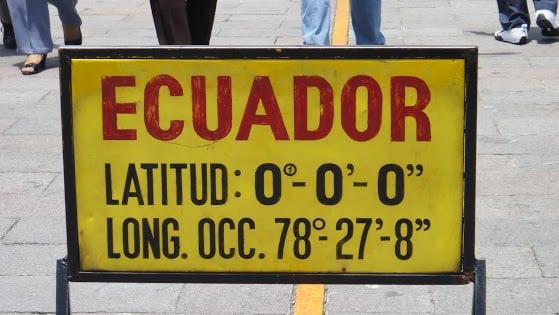 The first thing I noticed about Quito is that none of the seat belts work in the taxis. But that is the least of your worries. You might think the biggest concern would be the recent politicial situation but despite the national state of emergency declared just days before we travelled, it all seems to have been a storm in a tea cup – when the BBC were showing images of tanks on the streets, the army forces had long moved on, any remaining presence of armed guards being the norm. As I said, this is not an issue.

Lonely Planet describes it as a vivid and colourful area for backpackers. The locals call it Gringolandia – so much so, it is labelled as that on all of the maps. Either way, one thing everyone agrees on (westerners and locals alike) is that care should be taken.

Witching hour in Mariscal is 9pm. The advice – walk the streets after this time at your peril. And never, ever, ever have a bag on you. Don’t take your passport (I wouldn’t anyway), nor your credit card (sounds sensible) and carry no more than $10. The problem with this is that Gringolandia seems to charge Western prices, making the $10 rule tricky to manage. So, taking all (most) of this advice into account I have been venturing out with nothing more than $20 and a lipbalm in my pockets. The latter item being my main risk as, unless there is a Benefit counter down the street, this is my most valued possession which is irreplaceable. It’s a risk I have taken and so far it has paid off.

I wish the same could be said for trying the local cerviche. Basically, a dish of raw seafood marinated i.e. cooked in lemon and spices. I can confidently confirm that this was a risk not worth taking. On the plus side, my plan to be a stone lighter by the end of the week is now within my reach. In hindsight, why on earth I thought raw seafood sprinkled with lemon would do anything other than cause me to spent a fair while in the baños, I’ve no idea. Tonight I will be sticking to the second local past time – chicken and rice (pollo y arroz)!
So, dicey food experiences, political instability and regular muggings (we did see a live one while we were having dinner the other night), is there anything good about Quito? Part of me wants to say no, and leave it there. But the old town is undeniably beautiful – they have more churches than London has MacDonalds and the colonial past gives plaza after plaza of beautiful buildings. The bus journeys with the locals, especially during the mid-day rush of people heading home for siesta is very colourful – this time in a good way. Karen is by far taller than all of the locals and for once in my life I am a regular height. Something that should not be overlooked as a plus for visiting a country 🙂 Finally, there is the proximity to the equator.

Just under 1.5 hrs north of Quito, two buses (one with some pretty cool music to pass the time) and only 80 cents each, and it is possible to make a small hop between the Northern and Southern Hemispheres at the Ecuator, Quito. With the mid-day heat shining down, I can say that for once the north and south are as hot as each other (my burnt forehead confirms this) and there is something quite awe inspiring about standing on the line that marks the middle of the world.

With this in mind, Quito is not all bad. It has also give me a chance to take a few hours of Spanish lessons. I realise that this is something I am going to have to invest quite some time in as, like most foreign languages, there are enough nuances that can put you in a tricky situation quite quickly as I found out in my second lesson. Apparently it is fine to describe a drink as caliente (hot) but as soon as you say ‘I am hot’, like you might on the one or two days a year the temperature heats up in the UK, in Spanish it changes meaning to ‘I want sex’. Clearly a very different meaning and one you don’t want to try out on the local men who are stuck in an age where whistling, beeping and generally shouting (in their view) ‘compliments’ is their way of approaching women. I will definitely have to work more on my Spanish!

Today we have moved hostel and it is the start of the Intrepid trip. Thirty four days working our way from Quito down to La Paz in Bolivia. We’ll be in the Jungle in a couple of days, which sounds fantastic. In the meantime, we will venture into Mariscal tonight for some more training in case we meet any wild animals in the Amazon 🙂

Post script: Mum, do not worry! A childhood in Liverpool, training as a lawyer and getting drunk in London late at night makes Quito feel like a trip to Disneyland!!!

4 thoughts on “The Equator, Quito: Journey to the Centre of the Earth”