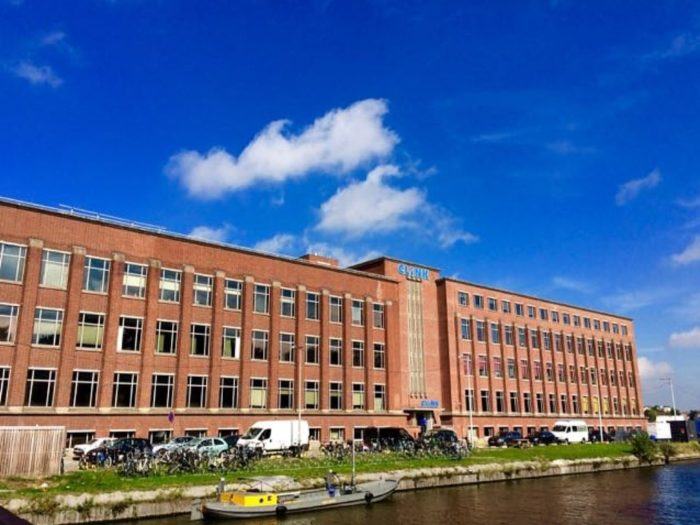 “It’s ugly, isn’t it?” I looked at my guide, Bas, and he nodded, a big smile on his face. He wasn’t offended, because I guess he knew what was my next comment was going to be. “Ugly, but cool. Very, very cool.” Bas nodded again; his smile hadn’t waiver.

We were talking about Amsterdam Noord, an area of Amsterdam that’s situated just a few minutes by ferry from Amsterdam Central Station. For the longest time this part of the city was blanked by tourists. Even the locals didn’t truly consider it to be part of Amsterdam.

Looking around, I could see why – there were none of the tall, jauntily angled candy coloured houses that draw visitors to Amsterdam’s historic centre. Amsterdam Noord is blocky and largely coloured in brown and concrete grey. 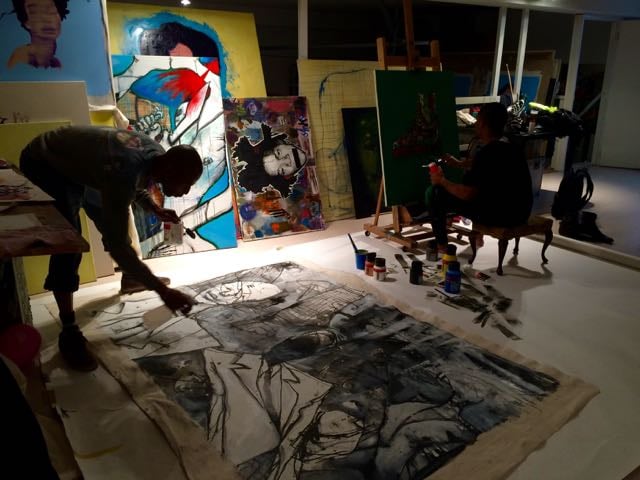 But beneath it’s seemingly miserable exterior lies a story of regeneration. Amsterdam Noord is on the up and it has creativity running through its veins. Quirky cafés, craft breweries, start-ups and artists have all elected to call Amsterdam Noord home; and it’s attracting the cool kids in droves.

Sure, this neighbourhood might not be as aesthetically pleasing as its counterpart to the south and for that reason it rarely makes it onto your average traveller’s itinerary. But you’re not an average traveller, are you?

If you’re done with the crowds or are looking for alternative Amsterdam, the north is without a doubt the best part of Amsterdam to be. Here are seven secret spots to get you started. 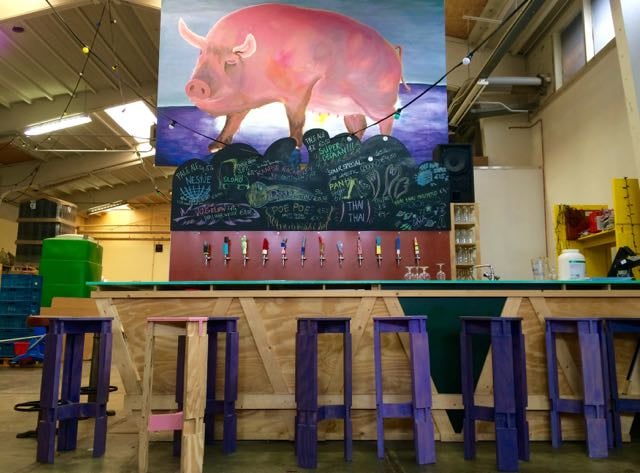 Unless you’ve been face down in a pint of Stella Artois for the last few years, you’ll know that the global craft brewing scene has been taking off faster than a space rocket, and Amsterdam certainly hasn’t sat this one out.

Oedipus is the brewing baby of four friends who started craft brewing as a hobby and, as they put it, now that they’ve quenched their thirsts, they can share their beer with the world. Thanks, lads! 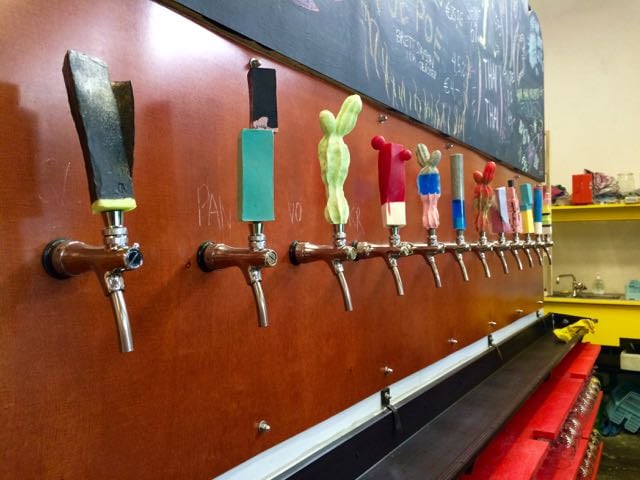 My favourite was the Thai Thai but I do have a weakness for something a little spicy. 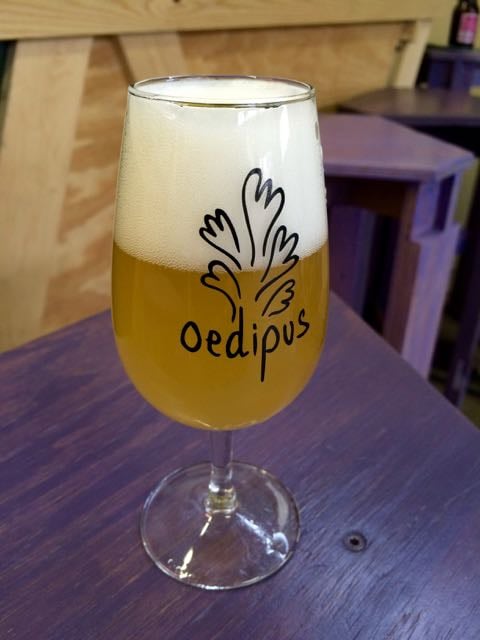 You can find out more at Oedipus Brewing. 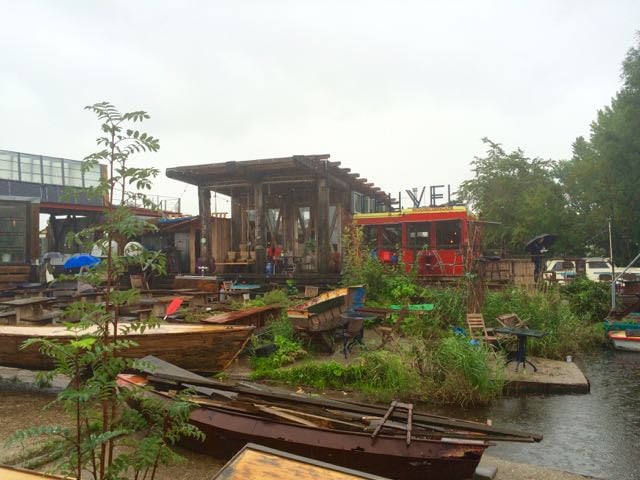 I wrote a while ago about why chain restaurants are a bad idea and Café de Cuevel seems to have been crafted as the anti-chain. Not only does the café strives for self-sufficiency where kitchen waste is made into bio-gas for cooking, the entire place is made up of recycled and upcycled materials. 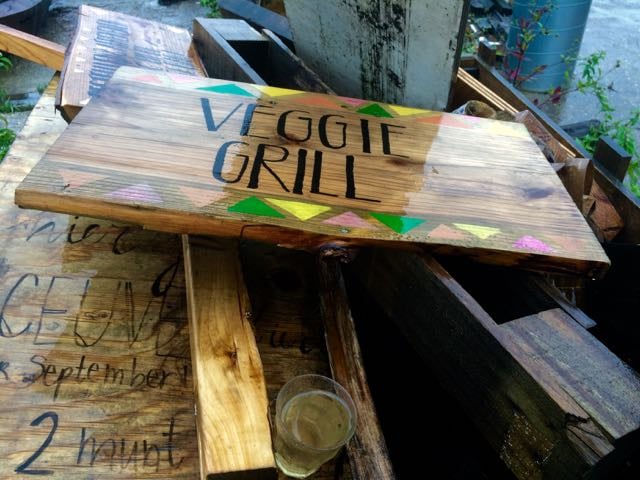 The food is on a good path, too. Delicious, healthy and affordable are what you might expect but by working with hyper-local producers and cooking from their veggie garden, you can be sure you’re eating stuff that’s good – for you and the environment. 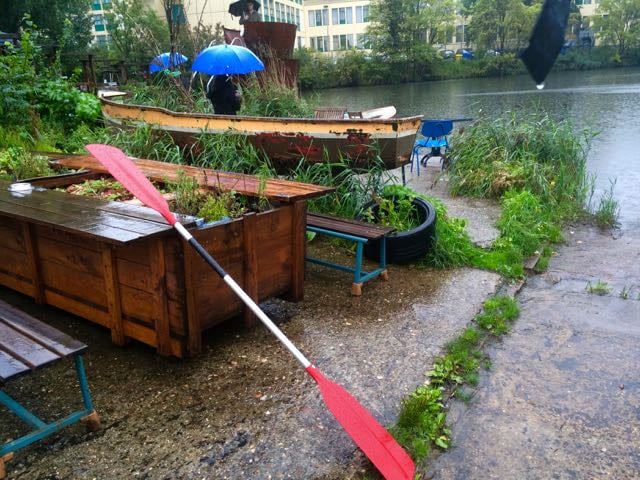 As if that wasn’t impressive enough, the café is located in a former ship yard. Of course.

You can find out more at Café de Ceuvel. 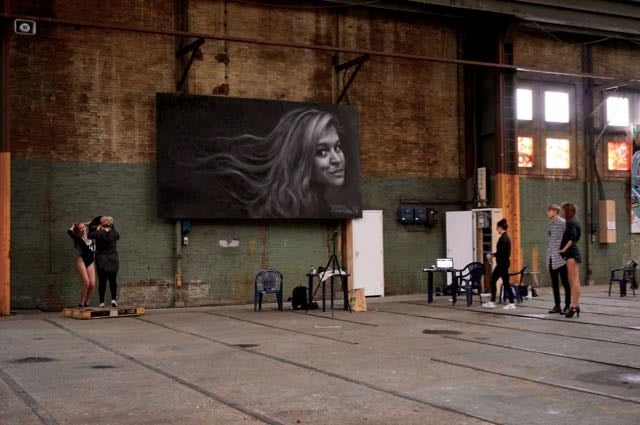 If you’ve heard of IJ Hallen, you’ll most likely know this vast warehouse as home to the largest flea market in Europe.

However, this space is taking on a whole new life. Although the flea market will continue to run once a month, IJ Hallen is being turned into the world’s largest street art museum. As Bas said – great combo. 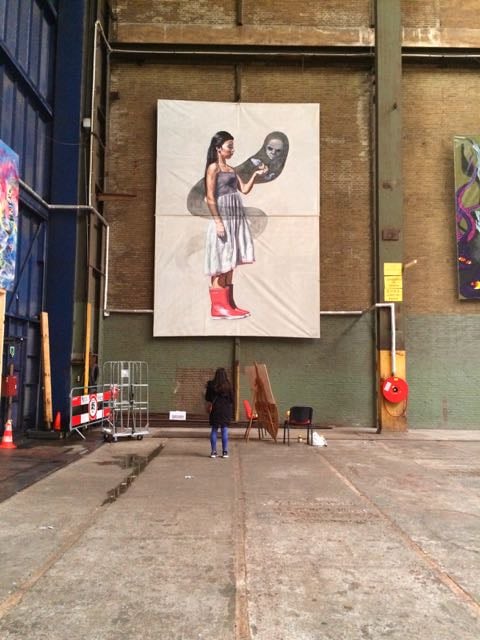 It’s hard to grasp the enormity of this space without the addition of what look like toy cars or Alice in Wonderland sized shrunken people (both of which are life size in the pictures below, believe it or not). 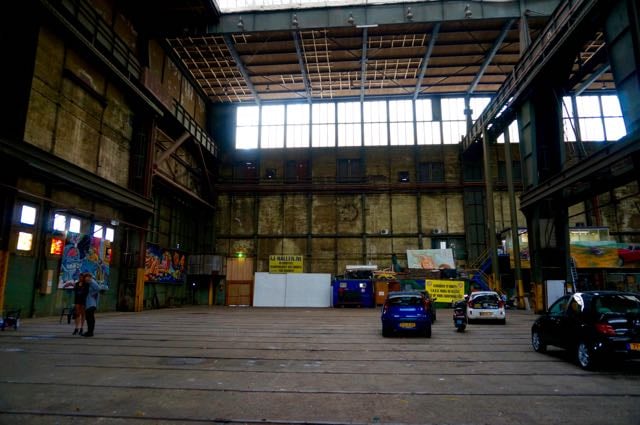 Yet, somehow, the huge space is filled…with palpable excitement – from both the artists and the visitors.

You can find out more at IJ Hallen (more information coming online soon). 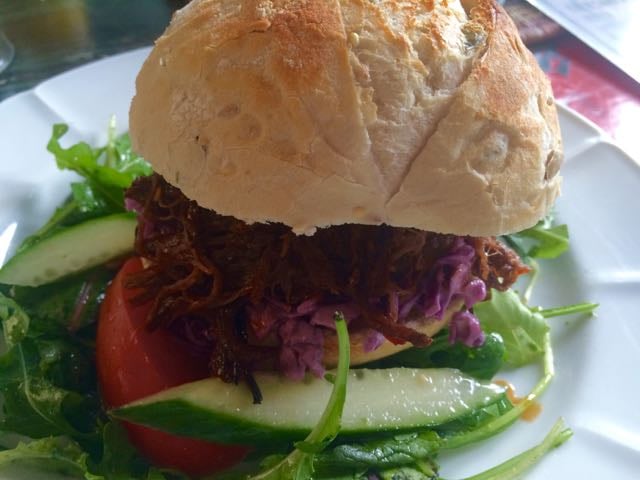 The Rolling Rock Kitchen (or ‘the Rock’ as it’s known), is a hotspot on the Amsterdam Noord dining scene and having sunk my teeth into their pulled beef burger, I can see why it’s popular.

In summer, the terrace is perfect for sipping a craft beer from their extensive range.

On a rainy day, sit inside – you’ll be so busy chomping through your food that you won’t care what’s going on around you.

You can find more at Rolling Rock Kitchen’s Facebook Page.

Eye, a film museum in Amsterdam Noord, has been dubbed “the cinematic memory of the Netherlands” and it doesn’t seem like too grand a claim when you consider that the museum has a collection of around 40,000 films across the full range of genres.

Eye features four cinemas as well as a bar and restaurant to feed and water you between shows. Open from 11 a.m. to 11 p.m., your biggest issue is going to be forcing yourself out of Eye to explore the rest of the north.

You can find out more at Eye Film.

If you’re looking for what is arguably the best terrace in Amsterdam Noord (and, indeed, Amsterdam), then head to Cafe ‘t Sluisje. A brown café (pub as we know them), Cafe ‘t Sluisje has been going for 110 years but it’s in its infancy compared to the lifespan of the building it occupies, which was built in 1565.

As well as a lunch and simple evening menu, the café organises social events so check the website to see what’s on when you’re in the neighbourhood.

You find out more at Cafe t Sluisje. 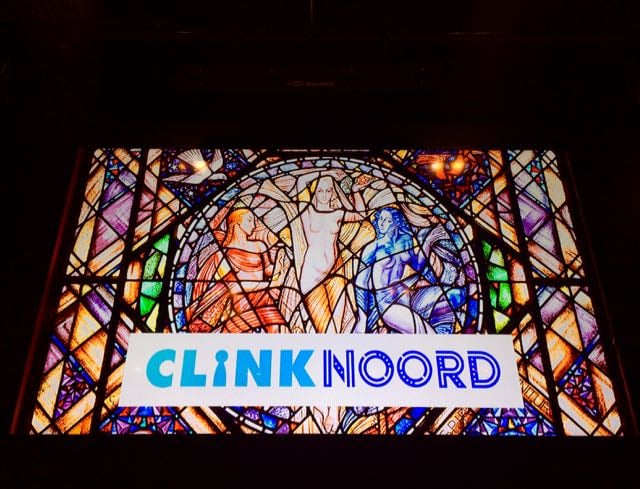 I can’t exactly call ClinkNOORD a ‘secret spot’ because the Clink brand has been on my (and possibly your) radar for some time.

I first met Clink when I (admittedly unkindly) booked a prison cell room for myself and a friend as a surprise for her birthday. She has an irrational fear of being imprisoned for a crime she didn’t commit and I thought, hey, maybe a night in a cell (at the Clink 78 hostel in London) might do her some good? Fortunately, she had enough jager shots in the bar to obliterate any memory of the evening (it seemed a fair response). Meanwhile, I found a hostel brand I loved.

And now the people behind two of the most popular hostels in London (Clink 78 and Clink 261) have opened their first hostel overseas. And because they’re a cool brand that know where it’s at, they’ve opened it in Amsterdam north.

ClinkNOORD has been born.

With it’s plant-filled atrium, Zinc Bar and library, ClinkNOORD is definitely a design hostel and, having been constructed from the foundations up, the hostel is in top-notch condition: clean and modern with a well-equipped kitchen, fast wi-fi and enough power sockets in all the right places (a.k.a. next to your bed).

You can read more and book a room at ClinkNOORD.

How to get to Amsterdam Noord

From Amsterdam Central Train Station, follow the very clearly posted signs to the ferry. Leaving the station, the ferries will be located just across the road on your left.

Depending where you’re planning to explore in Amsterdam Noord, take the ferry to either Buiksloterweg or IJplein (If you’re staying in ClinkNOORD, go to Buiksloterweg).

The ferries are free and run every few minutes, 24 hours. They are operated by GVB.

You can read more about getting to Amsterdam Noord at IAmsterdam.

How to get around 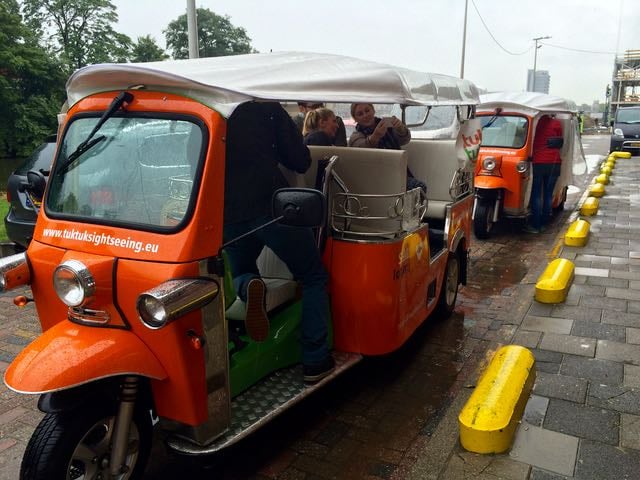 Bike is undoubtedly the most popular way to get around Amsterdam but if, like me, you can’t ride a bike (long story) or the rain is persistent (like when I visited), why not take a Tuk Tuk?

Not only was this the most fun I’ve had outside Asia, the drivers were the most amazing souls – so much so I felt sad when we had to part ways (and I’m not one for excessive emotions).

You can find out more and book at Tuk Tuk Sightseeing. 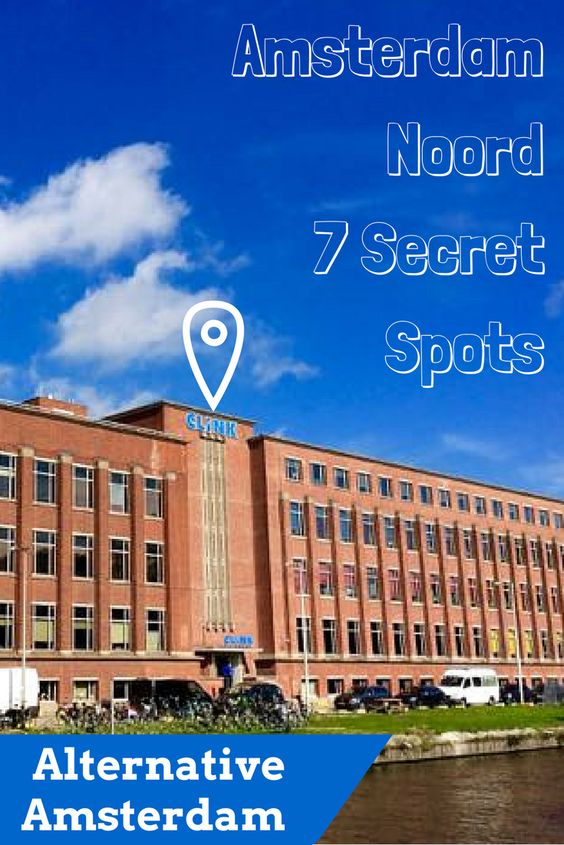 Seeing the Tulips in Amsterdam at Keukenhof Gardens

30 Best Things To Do In Malaga

40 Things To Do In Milan (That Aren’t Churches)

Where To Eat And Drink in Brussels

One Day in Warsaw

3 Days In Florence – The Itinerary I give My Friends

Want to find out more about Amsterdam Noord and ClinkNOORD, check out these articles:

Ale, Art and Cinema: The Reasons to Love Noord

My visit was courtesy of ClinkNOORD.